Home city guide friendship with the khasis of shillong

Friendship with the Khasis of Shillong!

Shillong is the capital of Meghalaya, a hill station, headquarters of East Khasi Hills district and is also called 'Scotland of the East'!

The districts of Khasi, Garo and Jaintia hills together comprise the state of Meghalaya. Ethnic tribes by similar names inhabit in this state - Garos (of Tibeto-Burman origin) in the Western area, Khasis (of Mon-Khmer ancestry) in the Central area and Jaintias (from South-East Asia) in the Eastern area. These tribes differ in tradition, costumes and religious practices.

Khasis are said to be descendants of Proto Autroloid Monkhmer race. Khasis living in other states in India have been granted the status of Scheduled Tribe. The youngest daughter inherits the entire property. However, if she does not have a daughter, the property gets transferred to her sister after her death from whom it is transferred to her daughter. 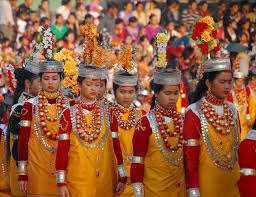 More About Khasis of Shillong

They are called 'Hynniewtrep' which means 'the seven huts' and constitute about 50% of the population in Meghalaya. Those Khasis who inhabit in the hilly areas of Sylhet and Bangladesh are said to be of the War sub-tribe. Do you know that it is the War-Khasi people who have designed as well as built the living root bridges of the Cherrapungee region? Their language is classified as a part of the Austroasiatic language family. The Khasis are known for their skills for making cane and bamboo products such as baskets, mats, hats, moorahs, headgears etc.


Religion  of Khasis of Shillong

They follow varied religious practises such as Presbyterian, Anglican, Unitarian or Roman Catholic. Most of them also follow the indigenous Khasi religion - Niam Khasi and Niamtre. Khasis follow culture and norms of the matrilineal community which means that the family lineage is taken from the mother's side. However, the role of father in the family too is significant.

The Khasis believe in one supreme God 'U BleiNongthaw'. According to them, life is a precious gift. Their tribal religion is called 'Ka Niam Khasi' or 'Ka Niam Tre' which is practiced by a substantial minority. Today, many from the tribe have embraced Christianity as their religion. 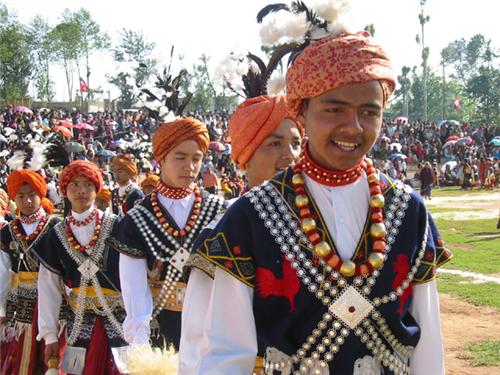 Festivals of Khasis of Shillong

KaPemblangNongrem dance is a five day long festival of the Khasis. It is held every year in village Smit which is about 11 kms. from Shillong. The festival is also called popularly as Nongrem dance.
Second week of April witnesses yet another celebration in Shillong with Shad Sukmysieum festival! Then comes Christmas whicg is celebrated with much enthusiasm and fervour. Well, music comes inherently to the Khasis!


Dress of the Khasis

Traditional dress worn by male members includes a Jymphong (long sleeveless coat without a collar). They wear this dress along with sarong and an ornamental waist-band during special occasions. Nowadays, men wear western attire also.

The females wear Jainsem or Dhara which impart a cylindrical shape to the body along with a crown of gold or silver. A spike/peak is fixed onto the crown of females (feathers for men folk).

Khasis are exogamous and believe that marital partners must not belong to the same clan. Young men and women have a choice to choose their mates and get acquainted with each other before marriage. Rings or betel nut bags are exchanged between the two families during marriage ceremony as a mark of union between two souls - the bride and the bridegroom.

Divorce may result due to factors such as incompatibility or lack of offspring. Nowadays, the Khasis divorce through the Indian legal system instead of the age old traditional ways.

Food Relished by the Khasis

Their main food is rice. They love to eat fish, meat and even prepare tasty drink like rice beer by fermenting rice. Rice beer is a must during festivals and family ceremonies. To show hospitality, the Khasis offer ‘kwai’ (betel) to their guests. They adore continental dishes more than fried ones. Bamboo shoot pickle is savoured by them. And the pineapples spiced up with tangy spices... you will relish them when you visit Shillong!