The capital of Meghalaya, Shillong  is situated on the eastern part of the state. Sitting at the top, at an altitude of 1,520 meters (4,990 feet) above sea level, the city expands for about 6 km on an upright tract. It is situated on a plateau bounden on the , on the northwest by the great mass of the Diengiei Hills and north by the Umiam gorge that rise up to a height of 1,823 meters (6077 ft.) above sea level, and on the northeast it is bounded by the hills of the Assam valley. The  Umkhra and Umshyrpi rivers, which  merges  and form the Umiam River. 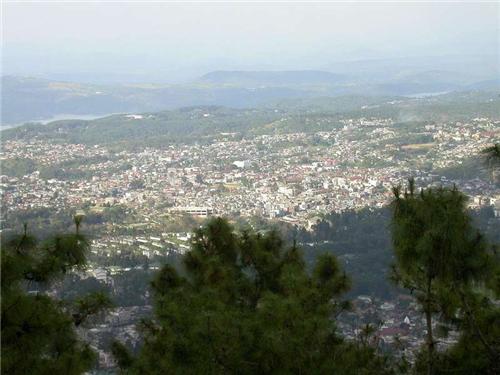 Shillong is located is on the Shillong Plateau, the only major structure in north-east India. The city lies right in the centre of the plateau and is bordered  by hills, three of which are revered in Khasi tradition: Lum Diengiei, Lum Shillong and  Lum Sohpetbneng . Shillong is believed to be the second largest hill station in the world after Brasilia.

The city has extended towards the north on the Guwahati-Shillong road and south-west on  Cheerapunji road and north-eat on the NEHuU campus at Malwai Areas.The new Shillong has develored on the eastern side of Shillong. The settlements are distributed over GSPA area but the major concentration of population is in SUA (Shillong Urban agglomeration) area which is almost 80%.

In Shillong Municipal Board hardly any population variation is seen from 1991 to 2001. Increase is significant population increase is seen in Nongthymmai, Pynthorumkhrah and Mawlai.